Last week’s trip to the Formula E testing session at Donington Park gave me a chance to try some longer-distance travel in the Leaf.  Travelling alone I could take my time, and maybe take some small risks with charging, without howls of protest from the family.

So it was that I set off from home near Salisbury just before 08.00 on Wednesday 9th July for the journey north.  First stop was at Oxford services, at the junction between the A34 and A44.  I poured myself a coffee and sat in the sunshine while the Ecotricity charger worked its magic.  I needed just one further stop at Watford Gap on the M1 (Ecotricity again), which was pleasurably extended by chatting to a retired couple from South Shields.  It turned out that they’re participating in the technical trials of the My Electric Avenue project, so for £100 a month they can travel the length and breadth of the country if they have the patience.   Between us we agreed that journeys involving more than one rapid charge are practical only if time is of no consequence.  In a Leaf that means no more than 140 miles or so.  If time is of the essence and money is no object why not buy a Tesla Model S?

Suitably refuelled I set off again and reached Donington Park around noon with about 30 miles remaining range.  After a thoroughly enjoyable afternoon (see Testing times for Formula E teams) I set off with a friend to find a pub for a quick drink.  Ignoring the advice of the Leaf’s navigation system, we followed brown tourist signs for seven or eight miles only to find that the much-heralded Queen’s Head was closed until further notice!  The Leaf then took us to a pub that was actually open.

I needed to return to Donington Park services for another Ecotricity-powered charge, and arrived there all but empty to find – to my surprise and delight – a Tesla Model S occupying the Ecotricity charger.  The couple driving it were taking pictures for some unspecified promotional activity but they did need a charge so I didn’t get connected until 8.30 and left the services just after 9pm.  This was going to be a long evening.

In good company at Donington Services

Watford Gap was too early for a stop on the way back, so I sailed past with no very clear idea where the next charging point would be.  The Leaf’s navigation system wasn’t very reassuring so I pulled into Northampton Services with some trepidation.  Sure enough, another Ecotricity charger hove into view.   The firm’s strategy of equipping service stations on motorways and trunk routes is working well, now that the network has grown to the point where you can be almost as sure of finding a rapid charger as a petrol pump.

Having checked the Ecotricity web site before leaving home (I do think ahead sometimes) I believed the charger at Chieveley Services to be out of action, so I stopped again at Oxford.  At the end of the charging session the battery temperature display was just below the red section, but it stayed there for the rest of the journey without going any higher.  Continuing south at my usual indicated 70mph, it began to look unlikely that I would reach Rownhams Services on the M27.  The alternative was a drive up the M3 to Winchester Services which, though safer, added about 40 miles to the journey because I had to carry on to Basingstoke to turn round.  Doh!  I was thankful that the family wasn’t with me to enjoy this little excursion, because I finally rolled home at 02.15.  A long drive, certainly, but curiously satisfying.

The day stands out in the monthly Carwings report, not just for the distance covered but because energy consumption dipped from its recent level of 4.3 miles per kWh to 3.7.  I’ve noted before that higher speeds have a more pronounced effect on consumption than you’d notice in an ICE car; I think that’s partly because the latter becomes grossly inefficient in heavy traffic, where the EV is in its element.

The experience will be useful for future reference.  Knowing, for example, that I can comfortably reach Oxford Services from home will make the next family trip to see friends at Milton Keynes a more relaxed affair.

Would I do it again?  Of course!

Posted by Neil Sutherland on 10 July 2014
Posted in: Events, Motorsport. Leave a comment

Yesterday I took a trip to Donington Park in the family Leaf to watch the third day of Formula E testing in preparation for the opening round of the championship in Beijing on 13th September.  I met up with a similarly geeky friend (thanks Alex!) for what turned out to be a glorious afternoon in the sunshine, listening to the unique – and really rather attractive – sound of electric race cars and watching the drivers, many of whom have Formula 1 pedigree, learning how to get the best out of their new machinery.

The cars and the race formats are both going to develop quickly but the organisers have made some good judgments in getting the series off the ground.  In the first season it will be a one-make series, with motors and batteries sealed.  That should make for close racing around the city circuits.  Next year the teams will be able to modify drive trains and in the following season I believe the chassis will also be open.  All this is designed to keep costs down and avoid giving too much of an early advantage to the better-funded teams.

From what I saw yesterday the portents are good. 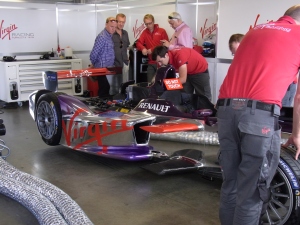 There’s one more chance to see the Formula E cars testing at Donington before they’re shipped out to China, and that’s on 19th August.  Admission free!

I’ll show you mine …

Posted by Neil Sutherland on 6 July 2014
Posted in: Events. 2 Comments

Spent a fascinating evening in Frome on Friday, at an EV ‘Show & Tell’ event. Considering the near-constant rain the turnout was excellent – drawn no doubt by the prospect of seeing a Tesla Model S in the metal. A gorgeous black P85+ was brought along by Malcolm Burgess, a British engineer who works for Tesla in California.

Virtually all the current crop of EVs were represented, but to show just how far EVs have come in the past 20 years it was great to see an elderly Fiat 126 loaded up with lead-acid batteries and a 13-amp plug!

Apart from EV geeks there were quite a few ‘normal’ people interested to learn more about what it’s like to live with an electric car.  Thanks to the presence of seriously experienced EV users like Kevin Sharpe and Paul Churchley I learned a few new tricks myself – like how to use the Android app Leaf Spy to get detailed information about range and battery condition.

A few who stayed to the end were rewarded with a quick (really quick!) ride in the Model S, which confirmed what we’ve all read: all the performance of a sports motorcycle with the refinement of an elevator. (Oh dear, going a bit US here.)

Best of all was that our Leaf made the 80-mile round trip without causing a moment’s range anxiety! 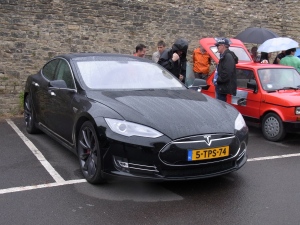